The Haries headed to Dundee for the 2019 edition of the Scottish Student Sport Cross Championship, with a record number of Haries signed up, it was bound to be a good one. We were team winners in the male and female races in 2018, and the plan was to defend our titles and that’s what we did!

The girls race got underway and was close at the front the whole way, between Scotland International and Strathclyde’s Kerry MacAngus, our much loved Harie, but not Harie, Holly Little and our very own Constance Nankivell. In the end, the Holly Little made use of her track speed to out-kick her competitors and win in 25.27, and Constance finished in bronze medal position, just 14 seconds behind Holly.

Social sec and previous Harie of the Week, Katie Lowery, produced yet another great performance, finishing in 9th position in 26.33. She was followed closely by Hannah Morrison, finishing just one second later. This resulted in the girls picking up first team prize, ahead of Aberdeen and Glasgow.

The hares were certainly packing, with Eilidh Jaffray one place and 9 seconds behind Hannah. Rona Tytler finished in 12th position, securing her Scottish Student’s vest for interdistricts in January. Polly Edwards continued the Harie’s domination finishing in 13th position in 27.13.

Next up was Carly Cameron, swapping 800m on the track for this hilly, 4 miles of mud, finishing in 27.53 and 19th position. She was closely followed by Rhiannon Kirk, in 28.06 and Katie Rourke got her cross-country season underway, finishing in 28.19. Jogging sec Catriona Allan followed closely, finishing just over 15 seconds behind.

Next up, was orienteer Niamh Hunter, who finished in 29.05 and Captain Lydia wasn’t far behind, finishing in 32nd position. Elizia Cottington was next Harie home, in 40th place. Louise Adams swapped orienteering for cross country, finishing in 31.43. Heather Nichols and Meera Al Omrani finished in 50th and 51st and Caitlin Beagan finished in 57th in 33.11. Lucy Haines rounded off a great day for the Harie girls finishing in 36.33.

On the boys side, Jack Leitch took the race on from the start, putting a bit of a gap into American Kevin Wood; enough of a gap for Jack to cruise to the finish and not push too hard, covering the 6 mile course in 31.45 and taking the gold medal – a very well deserved win. The hounds were packing too, with Callum Tharme, Dan Stansfield and Alex Muir coming home in in 8th, 9th and 10th position, taking the team title over Aberdeen and Glasgow.

Orienteer David Bunn put in another good performance, finishing in 32nd place and crossed the line with fresher Josh Liddle. Triathlete Lewis Khan had another good run, finishing in 36th spot. He was followed closely by Kai Hugtenburg – I’ve heard he is backing himself as a good pick for Harie Fantasy League!

The battle of the Marchmont Mandem (@marchmontmandem) was won easily by AJ, but Dan Smith and Paul Morrison were in a fierce battle for next best. Paul started strong but was about to drop out when Dan passed him, but he pushed on and outkicked Dan, finishing just meters ahead of him. They were followed by Nick Bennet, Alasdair Bisset and Cameron Currie. Ifan Oldfield’s illness got the better off him, but he was glad to make it round in one piece, finishing in just over 38 minutes. Irish postgrad Andrew Carrick finished in 38.42 and Conor O’Riordan finished in 81st place in 41.29.

Biggest kudos of the day goes to Gregor Malcolm (@gregor_malcolm_photography) who was let loose with Dan’s camera for the day – thanks Gregor for the photos! Another big shout out to Elisha de Mello, who despite forgetting to enter the race, still turned up and made a day of it! 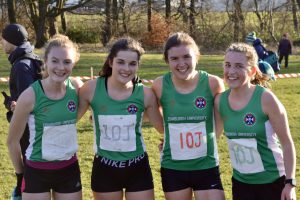